The stock and bond markets have had a historically bad start to 2022 as investors are feeling anxious about rising interest rates, high inflation, a slowing economy and war in Ukraine. Here’s how the US bond market, S&P 500 and Nasdaq have performed so far: 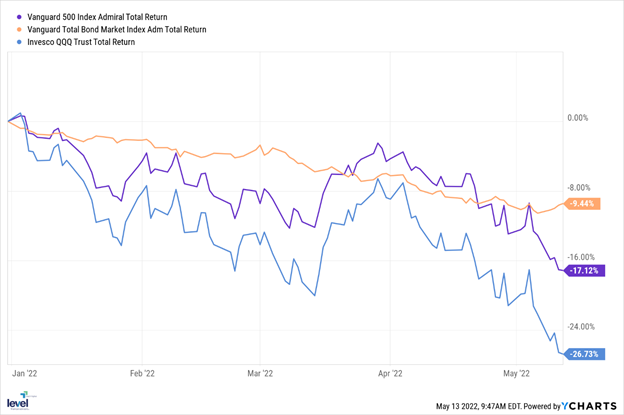 The downturn has been particularly bad for growth stocks and long-term bonds, which were two categories that had huge returns over the last three years. You may have heard us discuss how these categories were performing in previous quarterly letters and commentary along with our expectation that, at some point, these categories would cool off and other categories would start to lead. It certainly appears that moment has arrived.

As many of you know, we generally don’t make predictions about how the markets will react in the short term because we know that nobody has ever been able to reliably predict short-term market movements. The good news is we don’t need to predict market movements to have successful investment returns over the long term.

With that said, we want to point out several things to give context to this moment and how investors can be successful despite market turmoil:

Our portfolios are built with careful consideration to your goals, cash flow needs and risk tolerance. This means that we have taken in to account that the average retiree will face a big market decline like this once every three or four years and we should prepare in advance for that.

For us, that means having five-plus years’ worth of money in short-term bonds that we can use for any withdrawals you need without being forced to sell stocks while they are down. Short-term bonds are much less sensitive to rising interest rates, which is why they are only down 2%-4% for the year, while long-term bonds are down 20%.

Speaking of short-term bonds, rising interest rates are actually good news because, as the bonds mature, the cash is reinvested automatically in a higher interest bond. This means over the next year we should start to see substantially higher interest payments on those bonds, which should not only make up for the minor declines they have incurred, but result in higher expected returns in the future.

When looking backwards and seeing that every global stock market decline throughout history has eventually recovered and moved on towards new record highs, it seems obvious that rebalancing (i.e selling from overweight categories to buy underweight categories) is a smart idea.

The hard part is nobody knows when the stock market will stop going down and when it will start to recover. What we do know is that if you maintain a long term investment approach, when the recovery starts, whether it be next week or next year, buying stocks while they are down will be a smart move.

Also, remember that rebalancing will help accelerate your recovery whenever it is that stocks recover, because you bought shares on the cheap. We saw this happen in real life in March-May 2020, December 2018, January 2016, and late 2008 thru early 2009. Those who rebalanced and took advantage of the stock market decline recovered faster because of it.

One of the things that makes investing hard is accepting that you cannot control the markets. But, one thing you do get some control over is your tax bill from your investments.

These losses can be used to offset other capital gains, to offset up to $3,000 of ordinary income like wages or IRA withdrawals, and any unused losses carry forward to future tax years! We have already started the process of capturing these valuable losses just like we have in the past. We expect they will result in substantial tax savings for those who have non-retirement investment accounts with losses.

Lastly, it is always helpful to “zoom out” when seeing short-term market declines, even ones as substantial as this year. One would only need to go back to early 2021 to see the last time their portfolio was at current levels.

Said another way, what we have given up in 2022 is much of the profit we made in 2021. If we zoom out even further to look back over the last three years, we would see fairly average, annualized investment returns (despite a totally abnormal three years in real life)! This helps emphasize that while markets can be haywire in the short-term, they tend to normalize over the long run.

We know the markets have been difficult to watch this year, especially considering that both stocks and bonds have been negatively affected. We feel extremely confident in our strategy to weather the storm and are happy to talk this through if you want to discuss your specific plan. As the great Richard Schroeder would say – “Stay the Course!”